Midtown nyc was never what you would call hopping but at some point in march or april it was deserted; Jogging, at night, I could go for blocks without seeing a person or a car. Now the humans have returned but not the office workers, which means it’s not so much resurrected as undead.

Retail + offices form an ecosystem that’s currently pressured to the point of extinction but, because the lease terms are so long, it’s happening in slow motion. We don’t know if the next 5 years will see a return to normal or a parting of the seas as new yorkers decamp to jersey. There’s a chance the new normal turns commercial landlords, lenders and tenants into bad paper.

Speaking of horror, let’s talk about the best retail model ever invented: it has no long-term lease, its fit-out costs are minimal, and it only operates during the peak season.

I’m talking about the halloween popup store. They colonize empty storefronts like roaches, and in a downturn it’s better to be a cockroach than a unicorn. Whale falls create opportunities for small, hardy arthropods to have their day in the sun (so to speak).

This post is about the leading indicators of a market-clearing event in commercial real estate, and the innovative hardy arthropods who will move in to rebuild.

Retail is the walking dead

NYSRA has 63% of restaurants expecting to close this year barring more aid, though it doesn’t explain how they filtered out restaurants that had already closed. Yelp’s Q2 release shows 60% of temporary closures turning permanent, though they don’t way what % that is of all restaurants. My walking-around number is 30-50% of the shops around my apartment haven’t turned on their lights in a while, but my neighborhood got most of its daytime foot traffic from office workers and has been unusually hard-hit.

It’s not just closures either – there are underwater businesses hanging on in the hope they can reopen when life returns to normal. NYSRA has 90% of restaurants expecting to lose money in the second half of the year. A 40% ‘tsunami’ of retail chains have skipped rent.

Opentable’s state of industry dataset has US restaurants still down by half (and outdoor dining relies on nice weather, and this dips down again). I think restaurant margins are something under 15%, some amount of which is rent, so a 50% drop in traffic isn’t easy to absorb.

The comptroller’s 2017 retail vacancy report (slow site, pdf here) had retail vacancies creeping up slowly in manhattan, holding steady in brooklyn / queens, but that was before covid dropped an asteroid on these dinosaurs.

Subway ridership, which is sort of a proxy for foot traffic, is down 80%.

Offices are slow to break leases but slow to return

Actual utilization of leased office space is harder to measure than advertised vacancies, but even pre-covid this was low. Reuters claims ‘often 40-60%’, a number that sounds made up but even as a floor it suggests an unstable situation. And 80% of corporate tenants have reduced occupancy since covid, many by big fractions.

Colliers’ august manhattan office snapshot (click through to the pdf) is net negative, even with facebook’s large rental of the farley post office; subtract FB and august is abysmal. Sublet vacancies are way up, presumably indicating declining utilization or desire to break leases. And ‘absorption’, which I’m guessing means rental rate for new construction, is ‘negative’.

Note the sublets – this is a leading indicator for leasing generally. A hot enough sublet market essentially lets tenants renegotiate their leases without asking permission. It also makes it unnecessary and expensive for anyone to lease new construction or a whole floor.

Is the facebook blip something that could happen once a month? No. Not only is FB the largest of the large, but they’re also enabling remote status and surely regret having this building. At 730k square feet, facebook is as large as the three next-biggest leases combined, one of which is tiktok replacing skadden, another of which is paribas trading down from 400k to 300k sqft.

‘When do we return’ is an unanswered question but it won’t be fast. Even companies like netflix, who say ‘if the vaccine were today, we return tomorrow’, footnote that with ‘and by tomorrow we mean 6+ months’. And netflix is an extreme.

A range of return dates shows companies contemplating returning this year, next year, and / or never. Big banks like goldman and JP morgan rushed back and had to backpedal when people got sick. Marissa Mayer’s first act at yahoo was to ban remote work and it tainted her whole time there. Comparing retail closures to remote work, remote work feels like the trend that may become permanent.

This is a disaster unfolding slowly because there’s a lot of buffer in the system; many companies can afford to keep their leases, even if they’d like to break them. But all new capacity will be competing with a robust sublet market. In the face of a negative demand shock, commercial real estate needs to drop prices and find new customers.

What will colonize these vacancies

Yes, wework is a truly shitty company in many ways. But the nature of coworking spaces and the demand for it change if we have 12 more months of covid or continued retail vacancies.

If we don’t go back to large offices for a while, I can see people renting an abandoned retail space on their block and using it as a shared workspace with almost zero fit-out. (Maybe a wifi router and a smart lock). A services industry would naturally grow up around this.

The increasing sublet inventory for offices suggests that tenants want to break their leases, or at least downsize, and value flexibility. This is a two-sided market and coworking spaces may benefit from both: they can snap up space cheaply, and turn it around as flex space for the big cos who are breaking their leases.

These spaces will be covid-safe from birth and can impose invasive safety rules from day one. The rules will be annoying, but end up being a positive for tenants if the spaces can stay open during flare-ups.

This doesn’t have to be office workers, either – schools or students can get into this market if schools can’t reopen safely. And some parents will do anything to get their kids supervised and out of the dang house. If the city endorses this model, 1800 schools and 1.1 million students are suddenly candidates for ‘managed zoom spaces’.

Retail that’s vacant at last year’s price isn’t a death sentence, it’s just a statement about elasticity. But cutting rates is risky for landlords because you lock in that price for the term of the lease (often longer than a year for commercial leases), and set a low base for renegotation.

An index lease uses a published stat to size periodic adjustments. I think these are typically pegged to the consumer price index or LIBOR, but with retail tenants under all kinds of pressure, we can get creative and pin to local foot traffic, total metropolitan office use, or other metrics that value the space during a recovery.

Shortening the lease term is another way to increase the velocity of these deals and de-risk them, which in turn creates a technological need for cheaper fit-out.

I want so badly to take two floors of an office tower and build a sick go-karting track. A CBRE 2020 projection written before covid classifies this as ‘retailtainment’, and expects it to be a growing category, but notes that the space requirements will scare these businesses away from prime locations. Post-covid, if commercial vacancies skyrocket, that space may no longer be scarce.

Check out this 7 million dollar fitout for ‘urban air’ trampoline gym – if we had 100 idle floors in manhattan skyscrapers tomorrow, we could bust through some floors and build these vertically.

In general, a huge amount of idle tower space should lead to novel renovations that weren’t cost effective under an office rental market with zero slack. Imagine tall buildings adapted to the same use of space as, say, bushwick – residential blocks, gardens, and mixed-use, except instead of blocks they’re floors. 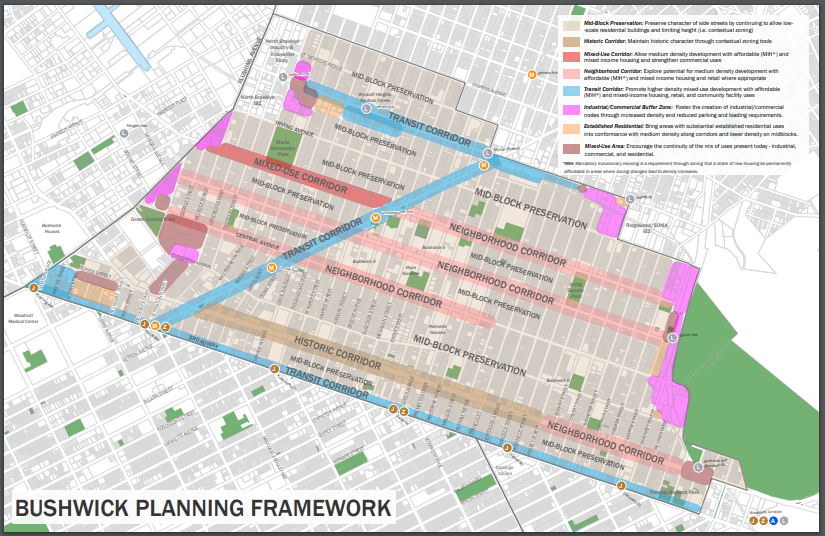 Is vertical bushwick a little too cyberpunk / kowloon walled city? Maybe, but if the gross need for office space trends permanently down, we need to do something with these buildings. Americans are less into high-floor restaurants than asia-pacific, but if we learned to love sushi we can learn this.

E-commerce doesn’t need as much retail space as say wal-mart, but that doesn’t mean it can’t benefit from retail for certain kinds of marketing.

In a consumer regime where e-commerce dominates and retail rents are dead cheap, platforms like amazon and shopify will plausibly lean in on showrooming, i.e. using IRL spaces to sell certain goods. Boutique apparel brands have been doing this forever.

Warby parker was pure digital and then grew to 90+ locations. I can see ‘warby parkerization’ of branded merchandise where brick-and-mortar is fast-follow to a successful product.

This is also a way for suddenly-less-profitable IRL stores to revitalize and turn into platforms. For example, bonobos launched their brick + mortar in partnership with nordstrom

I 1000% believe that shoppers like to touch things, even if technology eliminates the need to try stuff on. (And advanced manufacturing based on perfect measurements has the side effect of bringing manufacturing closer to the consumer, another potential use of vacant urban space).

There’s a paradox here because as retail spaces become less like a warehouse, simultaneously amazon is turning defunct suburban retail into warehouses. ‘Dead malls will be bulldozed’.

But this isn’t a paradox; it’s the replacement of 1950s brands with new players who have digital-first or omnichannel in their DNA, and who aren’t the equivalent of a shopify store bundled with an underwater REIT. The switch hitters will adapt and survive in the low-certainty environment for retail next year.

By which I mean a range of businesses that use robotics or other technology to deliver a good using less square footage and fewer human hands. This isn’t just the traditional automat model of premade sandwiches. It can be light manufacturing, clothes and shoes, repair shops, whatever.

Uber and airbnb are admired and hated for launching business that skirt, if not violate, the law. I think companies in the online sports betting space are in this bucket too. I could see a tech product using what we know about covid to create an indoor space that’s plausibly as safe as outdoors, and using data to prove that after rollout, and challenging municipalities to come stop them.

Does the new normal put down roots

‘Lockdown amplifies and accelerates all pre-existing trends’ is something I read in a matt ball tweet about video, and a lot of people have picked it up since then. I think it’s as good an abstract model as any.

There’s not much value in starting a ‘new normal’ company if the old normal moves right back in after 6 months.

But there are real problems that covid businesses are addressing: cities are expensive and unlivable. Point of sale sucks. Lines suck. Remote work is possible, if not always desirable, and offices aren’t cheap.

‘New normal’ companies that solve permanent problems are good bets. We’ll recover but we won’t entirely return to old mistakes. We resist change, but when we’re forced to, we fall in love with the future.

When I was a teenager I forced my parents to learn T9 texting. ‘This is worse than what we’re doing now and we don’t need it, and can’t adapt’, was their objection. Obviously they tried it eventually, and obviously they never looked back. Don’t write off the new normal. T9 is pretty cool.